The Stellar Performance of the Concord Solar Challenge

The Concord Solar Challenge became the highest-performing community solar program in Massachusetts because a group of environmentally-minded citizens saw the potential for a program, borrowed some good ideas from Solarize Mass, and installed technology that reduced the town’s carbon footprint by more than 1 million pounds per year.

The community solar movement in the United States began in Portland, Ore. in 2009 as a community-level bulk purchasing program for residential solar systems. The Solarize movement has spread throughout large areas of the nation and is especially active in the Northeast at present.

Massachusetts joined the movement in 2011 when the Massachusetts Department of Energy Resources (DOER) and Massachusetts Clean Energy Center (MassCEC) started the Solarize Mass program. Seeing the benefits, many communities are now choosing to run their own solar programs.

Recently, National Grid reached its net metering cap and eliminated net metering for systems larger than 10 kW within its territory. It does not appear that the cap will be lifted in the near term. This means community-shared solar system investments are not feasible in National Grid’s service area at this time.

In contrast, the basic intent of a community solar program is to drive the adoption of solar photovoltaic (PV) systems through a partnership between local solar ambassadors and a highly-qualified solar installer. The community volunteers lead the outreach effort with support from the installer. The installer provides high-quality solar installations under a tiered pricing structure that reduces the price for everyone as more people participate in the program.

For example, the Concord Solar Challenge is a community solar program that involves a group purchasing arrangement with a solar installer. The installer provided PV systems on rooftops and in backyards for homeowners, business owners, and nonprofits.

What the Solarize Mass Program Accomplishes

The Solarize Mass program, which was developed and run by MassCEC and DOER, has been an unqualified success. It has empowered communities to take action on climate change, raised awareness, put solar power within the reach of thousands of homeowners, and helped the state to achieve its renewable energy goals.

If a community wants to participate in Solarize Mass, it submits a proposal to MassCEC that outlines its commitment to the program and contains its plan to generate interest. If the community is accepted, MassCEC facilitates the installer proposal and selection process, allocates $2,500 for marketing, provides program deadlines and a reporting structure, and monitors the program.

Inspired by Solarize Mass, several communities have chosen to run their own community solar programs, either by choice or by necessity. Some of these communities have either not been eligible for Solarize Mass or have not been accepted into it. Some have felt that they know enough about how to select an installer to run a good program on their own. Others have wanted control and flexibility to set up the timing and characteristics of their programs in order to best meet the needs of their communities.

By necessity, Concord ran its own program, but the added control and flexibility of having a community-led program helped the town achieve extraordinary results.

How Concord Set a Record for Community Solar Installations

Concord has a long history of environmental activism. It was the home of America’s first environmentalist, Henry David Thoreau. It was also the first community in the nation to ban the sale of single-serve bottled water, an unnecessary product whose manufacture wastes natural resources.

Concord is a Boston suburb with approximately 17,700 residents and 6,700 single-family homes or condominiums. It is also served by a municipal light plant. These plants are subject to much less regulation than investor-owned utilities in Massachusetts and can set their own policies on solar power.

In early 2012, CSEC sponsored a Solar Fair with presentations and vendors. The fair resulted in 30 installations. While the fair introduced solar to many enthusiastic community members, the results were not sufficient to have a real impact on Concord’s carbon footprint. “Going solar” remained daunting for community members due to high prices and uncertainty about equipment and installers.

In late 2012, CSEC members heard about the outstanding results of the 2012 Solarize Mass program. However, because Concord has a municipal light plant, it was not eligible to apply for Solarize Mass.  So CSEC set up a local program with a similar model.

Members spoke with solar coaches from Solarize Mass, reviewed community and installer information on the Solarize Mass website, put together selection criteria for a qualified solar installer, and interviewed four of the installers who had participated in Solarize Mass. CSEC selected Astrum Solar (now Direct Energy Solar) as its installer.

In April 2013, CSEC launched the Concord Solar Challenge. The goal of the challenge was to add 100 systems. 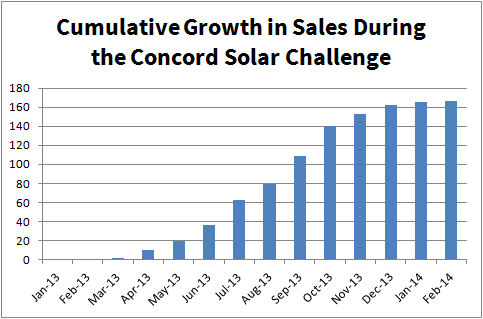 An extensive community outreach program was conducted – including a kickoff workshop, local newspaper articles, tabling at events, a town-wide mailing announcing the program, and a mailing by high school students to homeowners whose homes had good solar potential.

Information about the program was disseminated widely throughout town. Solar became the topic of conversation at formal and informal gatherings.

Solar was a lively topic at church coffee hours. One church was able to inspire its congregation to support a solar installation on the church roof.

Lawn signs helped people see that their neighbors and friends were installing solar and encouraged them to do the same. In several areas, many solar installations were inspired by neighbor-to-neighbor conversations.

A CSEC member was the solar coach for the program, helping community members to understand the nuances of their solar decisions and move forward.

The initial deadline to sign a contract was July 31. As of that date, 360 people had expressed interest and 63 had signed contracts.

Community interest was high, but people needed more time to make their decisions. Staff extended the program to Oct. 31. To encourage earlier sales, the installer promised to install systems by the end of the year for everyone who signed a contract by Sept. 27.

An additional 200 people signed up for free site surveys. By Oct. 31, a total of 140 people had signed contracts. At that point, enrollment in the program was closed and homeowners were given until the end of December to make their final decisions.

After including a few latecomers in early 2014, the challenge completed 166 contracts. This yielded 1.3 MW of solar power.

This was the best result achieved by a community solar program in the state at the time. On a per-capita basis, this has still been the state’s most successful program to date. The close rate on total leads – the sales as a percentage of total customers interested – was 30 percent. This was significantly higher than the Solarize Mass program’s close rate, which was 18 percent.

Many factors led to the success of the challenge:

·      The community has a strong culture of concern for the environment.

·      The Concord Town Manager and Concord Board of Selectmen endorsed the program.

·      Information about the challenge was placed prominently on the town’s website.

·      The installer provided a good price, a professional and qualified sales team, and strong marketing support.

·      Systems were installed quickly because of installer capability and support from the town’s municipal light plant and building department.

·      The Municipal Light Board enacted a net metering policy that both encouraged solar adoption and protected the ongoing operations of the municipal light plant.

·      Town management also decided that it was safe and legal for the municipal light plant to allow equipment lease contracts for solar power, making this less-expensive option available.

In addition to its environmental benefits, the program generated a lot of excitement in town, enhanced connections between community members, and helped homeowners and nonprofits make an investment that will pay handsomely for many years to come.

As a result of the challenge’s excellent outcome, Direct Energy Solar donated $15,000 toward a community solar installation. This system was installed in April 2014 and supplies electricity to a town-owned farm residence and farm stand. The town sponsored a solar party to bring together all of the people in town who had installed solar. The party was a resounding success, with a great turnout and many shared stories of why homeowners chose to move forward and how happy they were that they did.

In addition to its environmental benefits, the program generated a lot of excitement in town. 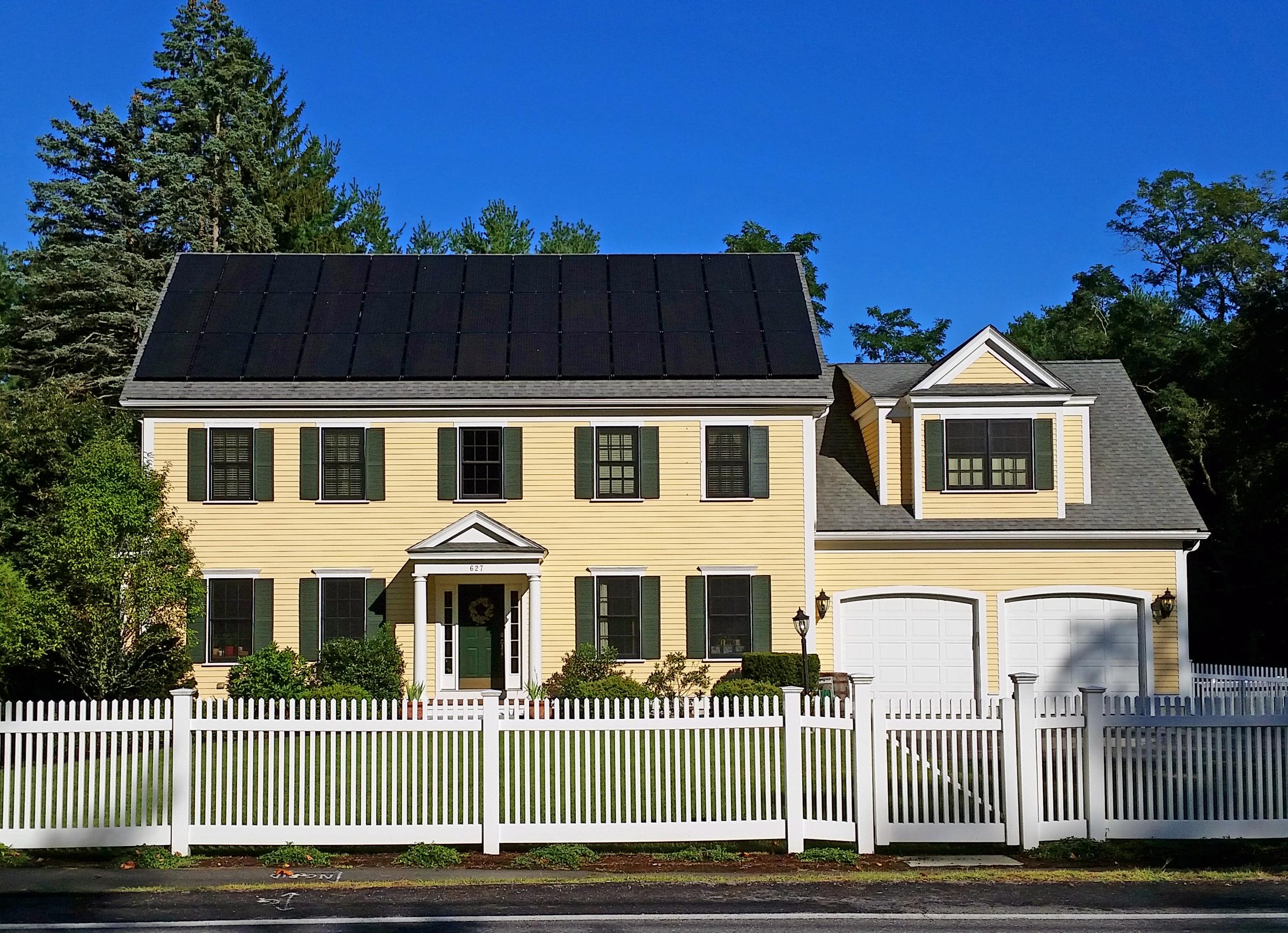 “Over two years ago, I looked into installing solar panels on my house,” said Steve Ippolito, a program participant, in an email interview. “I wanted to do my part to combat climate change, but was pleasantly surprised by how the financials worked out. The price quote using the solar challenge was significantly lower than the other quotes I got and the people from Astrum Solar seemed very competent. After the federal, state and local subsidies, I was expecting a five-year ROI and a 20-percent return thereafter. It was a no-brainer to proceed with the installation. It seems almost too good to be true, but after two years of experience, I can say I am getting the expected return. The system has performed perfectly since its installation. There is no maintenance and it is easy to forget that the system is there.”

The Solarize Mass program has empowered communities to take action on climate change and helped the state to achieve its renewable energy goals.

Why Other Towns Should Consider Similar Solar Programs

Solar PV provides the foundation for community action on climate change. Not only does it convert electricity to clean power sources, it also provides a clean energy infrastructure to support the replacement of gasoline-powered vehicles with electricity-powered ones. In addition, PV supports the conversion of fossil fuel-based home heating systems to high-efficiency electric heat pumps.

Solar PV systems are also a very visible and compelling way to educate and engage local residents in supporting clean energy and energy efficiency. Therefore, a community solar program should be one of a town’s first steps in combating climate change.

Community solar programs can be accomplished by any town that is willing to make them a priority and spend some time reaching out to local homeowners.

Jill Appel has an undergraduate degree in Accountancy from Bentley University and a Masters in Health Care Management from the Harvard School of Public Health. She has 25 years of experience in strategic consulting, systems development, process improvement, and health care finance. She was the solar coach for the Concord Solar Challenge and now serves as Direct Energy Solar’s Director of Community Programs in the Northeast.