Show Us The Data

A Conversation With Michael Blasnik

Show us the data. This is a key imperative that distinguishes BuildingEnergy Boston from other green building conferences, and no one on this year’s roster has more data to show than Michael Blasnik. Currently a building scientist at Nest, Michael spends his days digging into data on indoor temperatures, relative humidity, and HVAC run times from over a million homes across North America. Michael’s been doing this kind of work for over 30 years, working with utilities, government programs and private companies. So when I sat down to talk to him, I was most curious about what new lessons he was gleaning from the Nest data, and how this may influence our thinking about best practices for building and retrofitting homes for efficiency.

Rachel: You’ve been working with large residential energy use data sets for decades now. What’s different about the Nest data? Michael: Obviously the amount of data, but equally important is the high resolution of the data across a wide range of climates and over long stretches of time. When I started out 30 years ago, we were installing data logging systems in something like eight homes and measuring them for, say, a year. Now millions of people have paid good money to install internet-connected data loggers in their homes.

Rachel: What is the data telling you that you didn’t already know?

Michael: One thing is that it seems that houses are working a little better than many people think, especially in terms of humidity levels. There aren’t that many houses that are experiencing excessive humidity levels, say above 60%. One of the concerns among building scientists has always been that air conditioners are drastically oversized. And if they’re oversized they don’t run enough. And if they don’t run enough then they don’t dehumidify. The reality seems to be that air conditioners don’t have to run that much to dehumidify well.

Rachel: And what are the implications of this in your view?

Michael: Manual J and other sizing methods assume that people don’t change their set points, but that’s not how people actually use their air conditioners. Rather, people set their thermostats to different temperatures at different times, bumping up the set point when they go to work to, let’s say 78, and dropping it back down when they get home to, let’s say 74. But a system that is properly sized according to standard methods may not  be able to effectively cool a house down in the way people want.

Rachel: But wouldn’t it better to size the equipment properly and educate people to leave the settings alone?

Michael: Maybe that could work in a superefficient home. But in most homes it would waste energy to condition the home when people don’t want or need it. I also don’t think you can expect people to follow your orders. In addition, some people actually prefer to vary the temperatures in their homes over the course of a day – especially when heating -- and expect their HVAC systems to be able to accommodate that desire. One potential side benefit is that oversizing may actually help utilities deal with peak demand by providing for more effective demand reponse..

Michael: More and more solar is coming on line. Houses with PV systems, including mine, have very little demand, and their peak production occurs prior to peak utility demand. With oversized air conditioning systems you could use this excess production to pre-cool houses and then use that “coolth” to coast during the peak. Once the peak is over the systems turn back on to cool the houses down to the desired set points. Of course if you don’t couple oversized units with smart controls, you exacerbate peak demand. You need the two together.

Rachel: Are there ways that the Nest data could challenge what we in the NESEA community think of as best practice?

Michael: I’m seeing a lot of homes that are overheating in winter. When it’s 40 degrees out and the thermostat is set at 68, you can see indoor temperatures go up into the low 70s from solar gain and internal gains. And this is in average homes. Of course the more efficient the home, the more overheating you’re going to get if you don’t control for solar gain. I’m also seeing that many New Englanders like it colder when they sleep. I don’t think people always account for this when designing high performance homes. If you live in a passive house, or even a pretty good house, when you turn the heat down at night the indoor temperature is going to change very slowly. Your bedroom will not get cold. A lot of people building high performance homes are claiming that they are more comfortable, but I’m not sure overheating is more comfortable.

Rachel: So is this an argument for the pretty good house rather than the superefficient house?

Michael: Certainly it’s harder to maintain a tight temperature band in a house that doesn’t lose a lot of heat. You have to have a very well-designed HVAC system and solar controls. People in the NESEA community are doing this successfully, but if we want typical builders to build comfortable high efficiency homes with good air quality, we need to systematize our approaches. We need to make it easy for someone who isn’t going to Building Energy every year. And I don’t think we’re there yet. The other thing we need to keep in mind is that people want different things in their homes. When we design really efficient houses we have to make sure they’re going to work for a broad range of people over time. Not to mention that technologies are going to change. There’s a lot of uncertainty about the future.

Rachel: Isn’t there always going to be uncertainty?

Michael: Yes, so we need to design the best we can right now. But we also need to avoid the hubris of thinking we know the best way to do something, that we have this all figured out.

Rachel White is CEO of Byggmeister Design/Build, a nearly 40 year-old residential remodeling company that is striving to serve as an exemplary steward of homes and to prepare them to meet the challenges of the 21st century. Rachel has been affiliated with Byggmeister since 2008, when she hired the firm to renovate her house. What started as an effort to reduce the energy and carbon footprint of her own home became her life’s work. Prior to joining Byggmeister Rachel taught modern Jewish history to adult learners. She holds a PhD in Religious Studies from Brown University and a BA in... 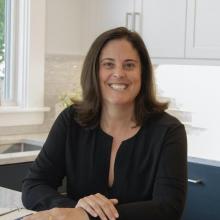